We Asked Artificial Intelligence to Develop a Video Game. Would You Play it?

Across the country, 2020 has been a mixed bag for millions of Americans living through a pandemic, the subsequent recession, and overwhelming political fatigue.

Despite these difficulties, the video game industry seems to be thriving. After months of quarantine, social distancing, and travel restrictions, video game sales in 2020 are booming, and 3 in 4 Americans are gaming. More than just computer games or consoles, even just being able to access the internet will provide access to one of the year's biggest trending titles, a simple indie game that only costs $5.

With the popularity of gaming, and the increasingly wide range of stories and game styles, we wanted to create a fictional game of our own to see if people were interested in characters and gameplay created by the OpenAI program known as GPT-3, a text generator. We used GPT-3 to create a hero character, bosses to battle, and friends to meet along the way in both story and arcade modes in a game called Candy Shop Slaughter.

With the characters and gameplay created by GPT-3, we then surveyed 1,000 gamers to find out if they would be willing to play it, how original they found the various aspects of the game, and whether they'd be willing to pay for it. Here's what we discovered! 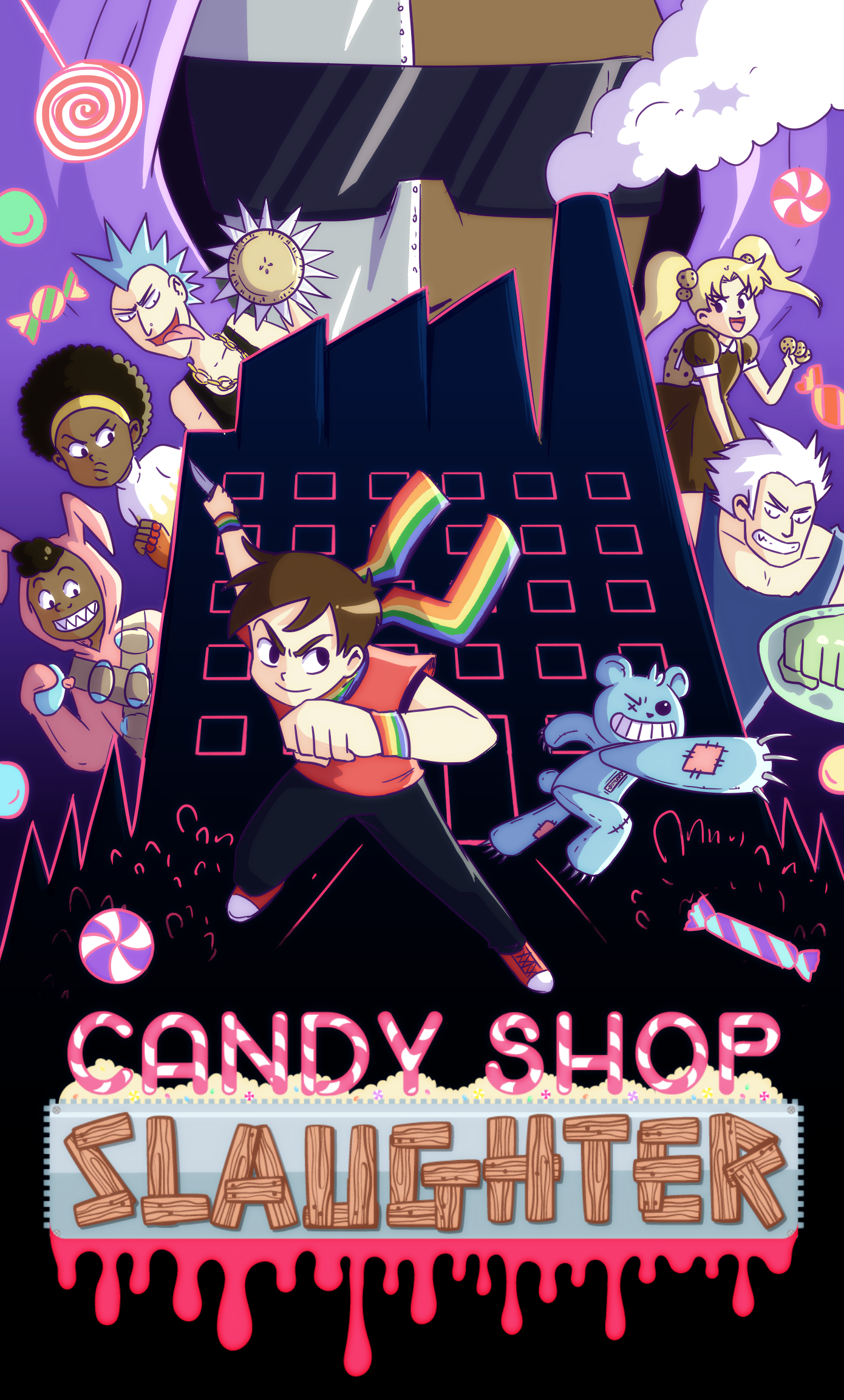 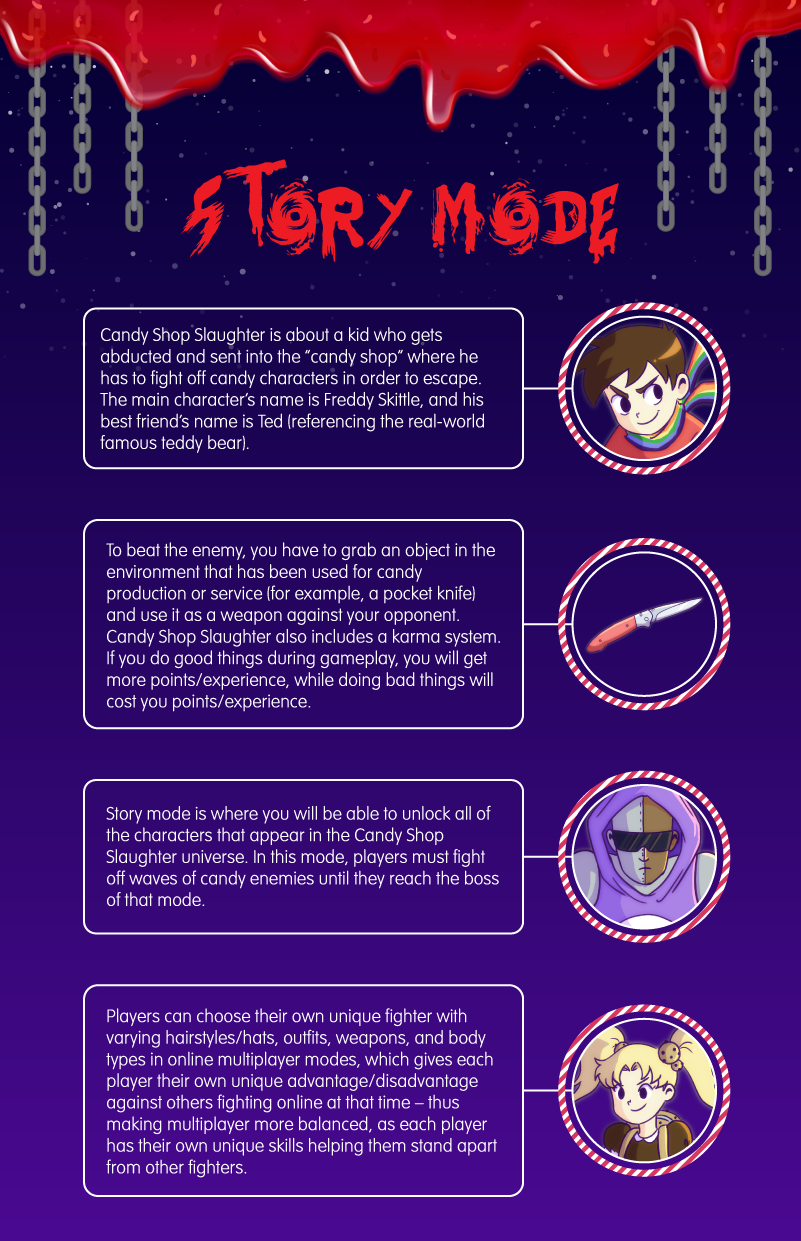 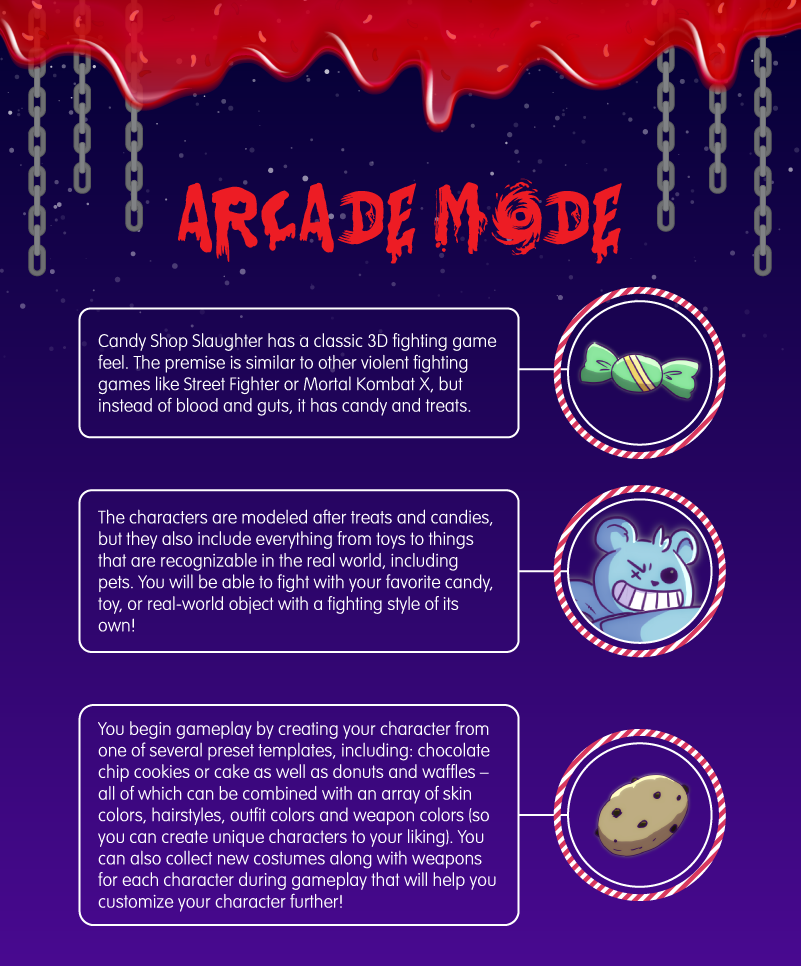 Here you can see the synopsis for both the story and arcade mode gameplay of Candy Shop Slaughter, featuring the main character Freddy Skittle and his best friend Ted. In story mode, the game utilizes a karma system where players can accumulate experience points for all of the good actions they make along the way and lose experience points when they make poor choices. The more they progress, players can unlock additional characters with different strengths that appear in the game's universe who can aid in the boss battles players will encounter.

In arcade mode, Candy Shop Slaughter turns into a classic 3D fighting game, where blood and guts are transformed into candy and treats and players can experience plenty of food puns and jokes along the way. Players start by creating characters from a template and have the opportunity to unlock new costumes and weapons as they play.

Here you can read through the 12 different characters descriptions, including their special moves and character interactions.

We showed 1,000 gamers the story and arcade mode overview for Candy Shop Slaughter, as well as the 12 character descriptions to get their opinions on the game. 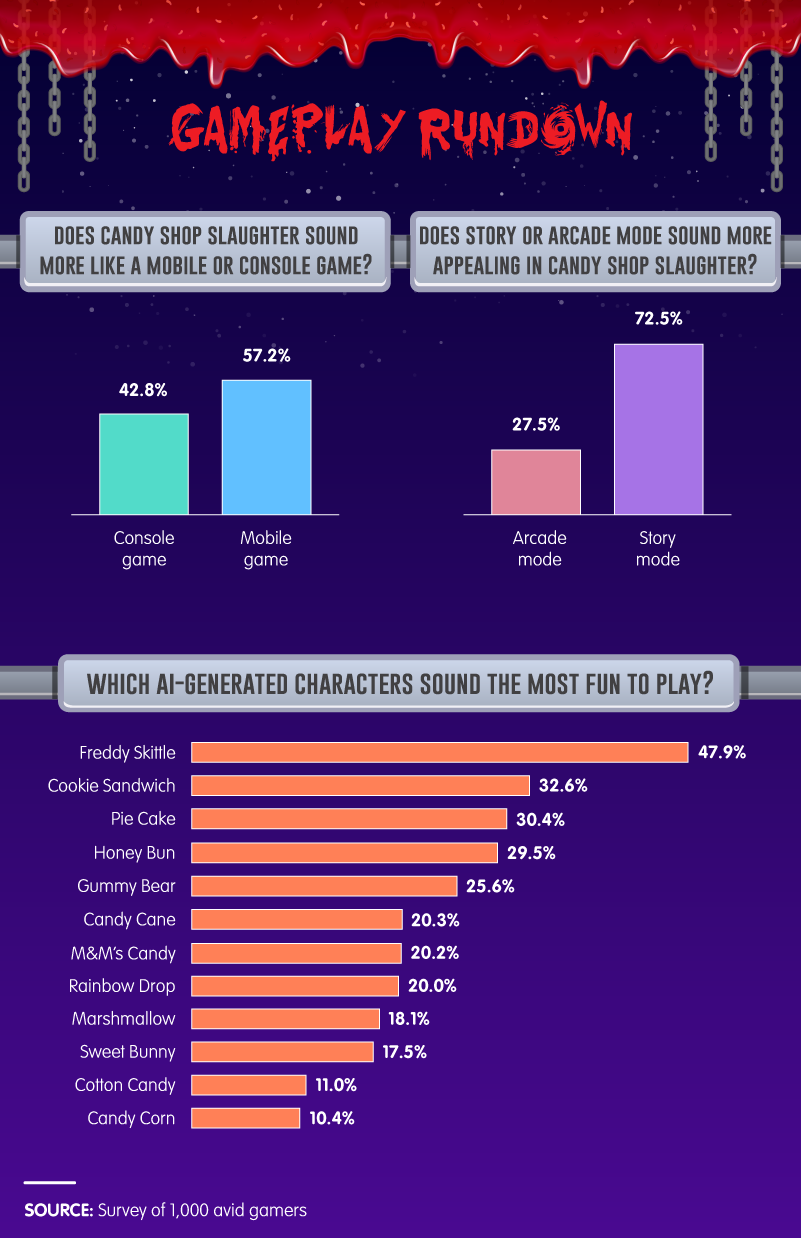 Among the gamers we surveyed, 57% indicated Candy Shop Slaughter sounded more like a mobile game, while 43% believed it would be a console game. With the descriptions of gameplay in mind, 73% also said the story mode of the game sounded more appealing, compared to just 28% who felt more intrigued by the arcade mode.

With the descriptions and details of 12 different characters, 48% of gamers felt Freddy Skittle (the main character) sounded the most fun to play, followed by Cookie Sandwich (33%), Pie Cake (30%), and Honey Bun (30%).

Some games are so intricate and tell such an interwoven story that players can spend 100 hours or more exploring every side quest and character arc along the way. In contrast, a simple game without any character development or plot, where players only differentiate between being imposters or crewmates can captivate millions of people simply by bringing them together.

We utilized the artificial intelligence program GTP-3 to create the description for a completely unique video game with story mode, multiplayer capabilities, and 12 different characters. Without any human input on the game, we found a majority of gamers were willing to purchase and play the game themselves. Many gamers also considered the premise of Candy Shop Slaughter unique, but it was the characters that proved most impressive.

Want to play a round with Freddy Skittle and crew? We don't blame you. Share the results of our study with your readers for any noncommercial use with the simple inclusion of a link back to this page for full visibility into our findings.