The #boycottNFL movement has been at the forefront of football over the past few years. Former NFL Quarterback Colin Kaepernick started one of the largest movements in sports history on September 1, 2016, when he decided to take a knee during the national anthem. Since then, the story has erupted into a national debate. There are two sides to the tale – many people are protesting against the NFL for patriotic purposes, claiming that player protests such as Kaepernick's are blatantly disrespectful toward the national anthem, and America as a whole. On the other hand, Kaepernick supporters boycott the league in response to increased police brutality, support for the Black Lives Matter movement, and general civil unrest across the country. The NFL has since condemned racism and encouraged peaceful protests. Regardless, the league is still feeling the effects of #boycottNFL as the line between politics and the sport continue to blur. 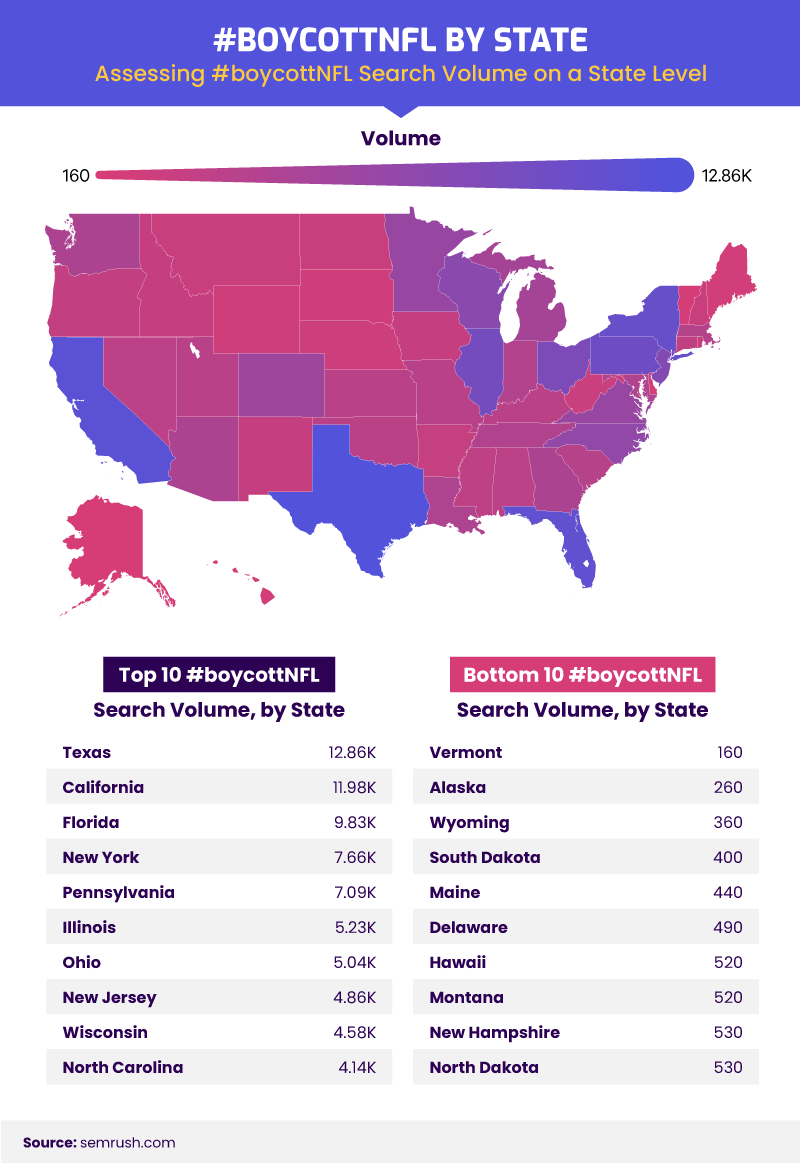 Among those searching #boycottNFL online, Texans, Californians, and Floridians claimed the top three spots. Unsurprisingly, according to a July 2019 estimate, they also have the highest total populations in the country. At the bottom of the list sat Vermont, Wyoming, and Alaska – which claim 3 out of the 4 least populated states.

The results were self-explanatory – generally, the more populated a state, the more search results there will be and vice versa. As of now, the motivations behind the searches are unclear on a state-by-state basis.

The Tale of Two Hashtags

Between September 9, 2020, and October 1, 2020, two prominent hashtags regarding the NFL were analyzed. Among 8,010 #boycottNFL tweets, sentiment analysis revealed that 40.54% of them had a negative connotation, compared to 30.32% positive and 29.14% neutral. The most associated words included ‘NFL' and ‘Boycott NFL.' Words such as ‘National Anthem' and ‘BLM' were also used – these words represent two major topics fueling the boycott movement on both sides (patriotic versus justice-seeking).

From 739 tweets referencing #TakeAKnee, 44.79% had a positive connotation, 38.84% were negative, and 16.37% were neutral. This phrase stemmed from Colin Kaepernick taking a knee during the national anthem and has since been used as an overarching symbol against social injustices that black communities face in America. Unsurprisingly, the most associated word with #TakeAKnee was ‘Flag.' The hashtag suggests and promotes kneeling during the national anthem, which many believe is disrespectful toward the American flag and what it represents.

From a survey answered by 976 #boycottNFL supporters, Arizona Cardinals fans were the biggest advocates for boycotting the NFL, followed closely by Giants fans. Detroit Lions fans ranked dead last – seeming to be predominantly interested in watching their team play football.

Regarding the boycotters, 46.5% of them attributed their support to their disdain with players kneeling during the national anthem. The Black Lives Matter movement was motivation for 26.8% of respondents, and 23% said it is due to national pride. The remaining 3.7% of respondents cited other reasons.

For the boycotting to end, 58.1% of respondents said they would stop if players were fined for kneeling during the national anthem. Additionally, 53.3% of boycotters would need said players to be suspended, and 25.9% wanted them outright banned from the league. NFL commissioner Roger Goodell has encouraged peaceful protesting, though, so boycotters might need to scale back their expectations. 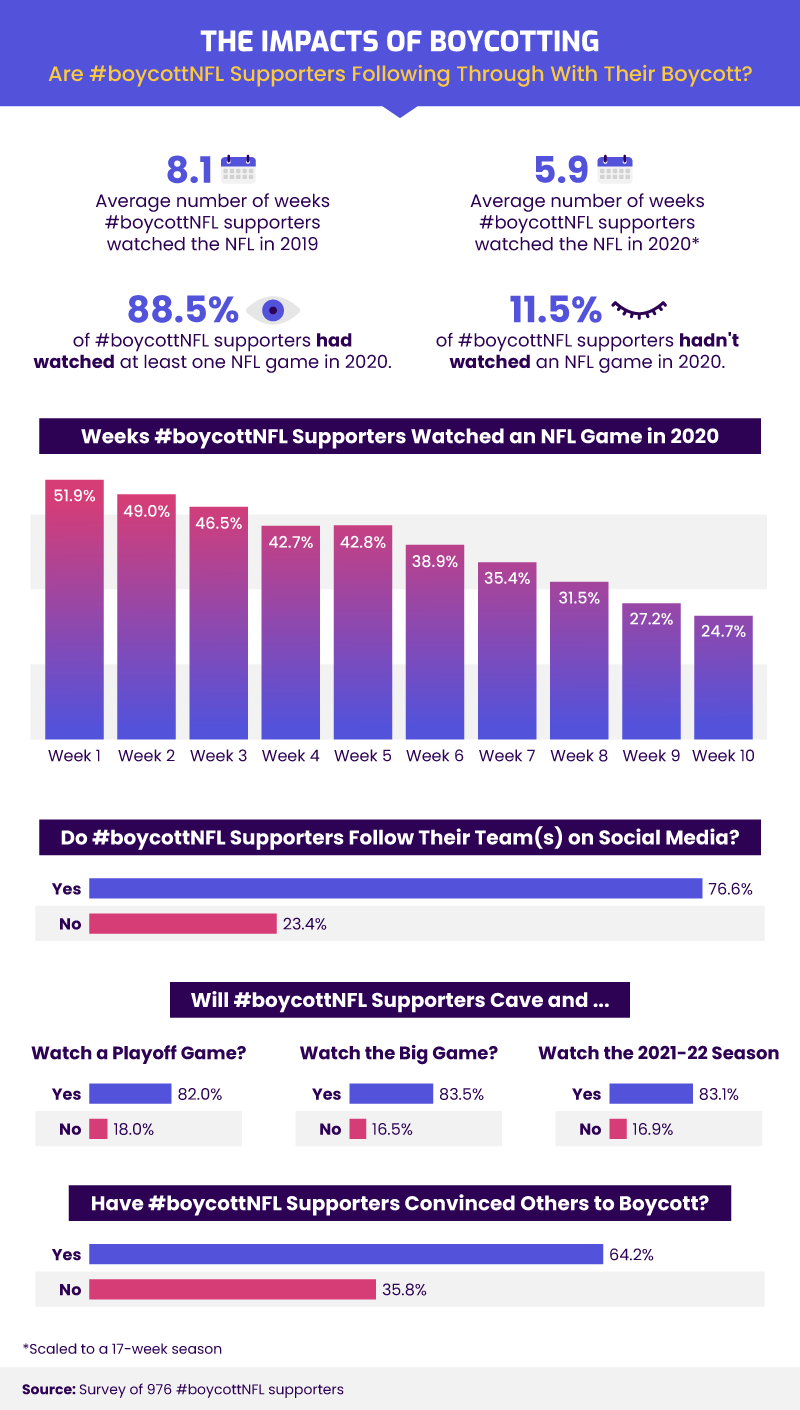 Out of the first ten weeks of the 2019 NFL season, boycott supporters watched, on average, 5.9 games. When considering all 17 weeks, they watched 8.1 games, on average. Only 11.5% of them admitted to not having watched a single game all year, whereas the rest had watched at least one. With all of the offseason hype, trades, and moves being put on display for the first time in Week 1, over half of the surveyed #boycottNFL supporters tuned in for it. Their viewership gradually declined over the next handful of weeks – by week 10, only 24.7% of them watched that week's game(s).

Regardless of watching, 76.6% of boycotters still followed their favorite teams on social media. Also, over 80% of them said they would watch a playoff game, the championship game, and the 2021 season. Just over 64% of them said they have been able to convince others to boycott as well.

Consequently, NFL viewership is down in 2020, although there are multiple factors that contribute to this besides the #boycottNFL movement. For example, the pandemic introduced major scheduling changes to other leagues, such as the NBA and NHL, creating overlap with NFL games. Regardless, the viewership is solid compared to other TV programs – this year's decline seemingly isn't something broadcasters need to worry about. 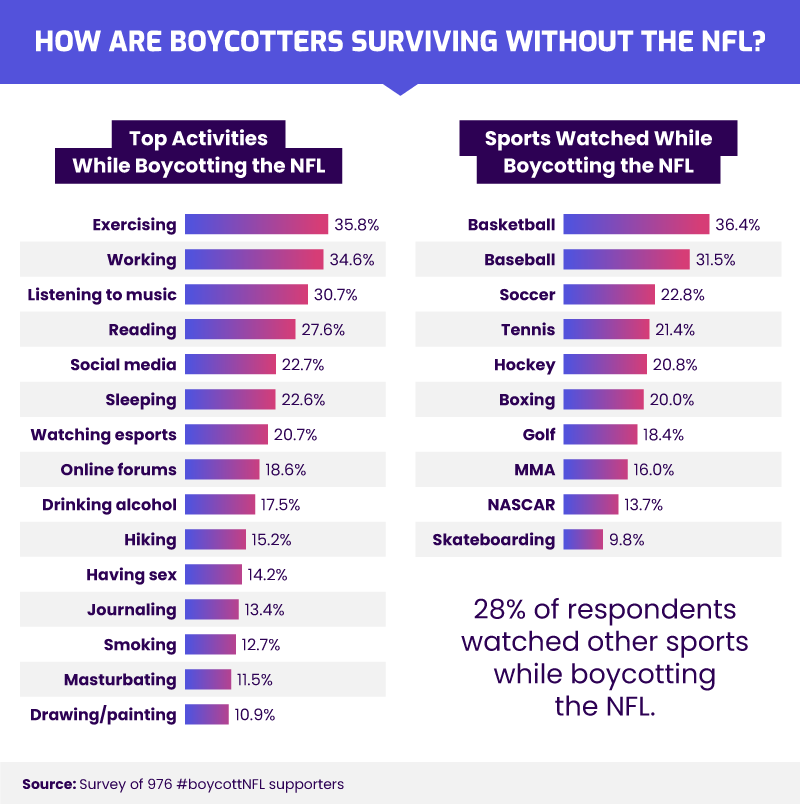 While boycotting the NFL, supporters found a variety of ways to keep themselves occupied. A lot of them (35.8%) had taken up exercising, and 34.8% had decided to plunge deeper into their work. Relaxing activities like reading and listening to music were also popular choices. A substantial chunk picked up an interest in esports, which has seen tremendous growth recently.

Additionally, 28% of respondents watched other sports. Basketball was the most preferred, with a 36.4% viewership rate, followed by baseball at 31.5%. Boycotters also got in touch with more niche sports – for example, 9.8% tuned into skateboarding events.

The Future of the League

From a single kneel to a full-blown nationwide point of contention, the #boycottNFL movement has been the source of much debate in the NFL world. Some abstain from watching games due to their national pride, while others forgo games to fight against American injustices. Caught in the middle, the league has done their best to ensure football remains one of the country's most beloved pastimes. Time will tell if the boycott movement will have a lasting impact on the NFL, but for now, it seems as if football is maintaining its status as the most popular sport in America.

Additionally, we collected responses from 976 sports fans using Amazon Mechanical Turk. To qualify for the survey, respondents had to indicate that they have been or are a fan of the NFL and support the #boycottNFL campaign. Of the 976 fans surveyed, 42.7% were female, 57.2% were male, and less than 1% identified as nonbinary. Additionally, respondents ranged in age from 18 to 76 with an average of 38 and a standard deviation of 13 years.

The main limitation of this study is the reliance on self-report, which is faced with several issues such as, but not limited to, attribution, exaggeration, recency bias, and telescoping. Data are solely representative of self-reported claims by fans, and no association with teams, venues, or cities should be inferred. This survey ran during November 2020.

The #boycottNFL movement is one of the biggest sports stories over the last few years, and there's lots more to learn about. We encourage you to share our findings if you'd like, for noncommercial use only. We simply ask that you provide a link back to the original article page so that the study's contributors can earn credit for their work!