Interest and investment in esports and online gaming industries are on the rise and have been for quite some time, as profits continue to increase year after year.  But just how inclusive is this industry to the LGBTQ+ community? We researched the top 500 esports earners of 2020 to find out how the LGBTQ+ community is represented and surveyed 500 LGBTQ+ gamers to explore their experiences with harassment while gaming online.

While determining the LGBTQ+ representation in esports, we discovered sexual orientation diversity is not a common topic of discussion, even though around 10% of gamers identify as LGBTQ+. Only a handful of top-earning gamers are prominently “out” to their communities due to toxicity towards sexual diversity. Sasha Hostyn, who is a top StarCraft II player and is openly transgender, has been subject to transphobia from some in the gaming community, among other LGBTQ+ gamers. 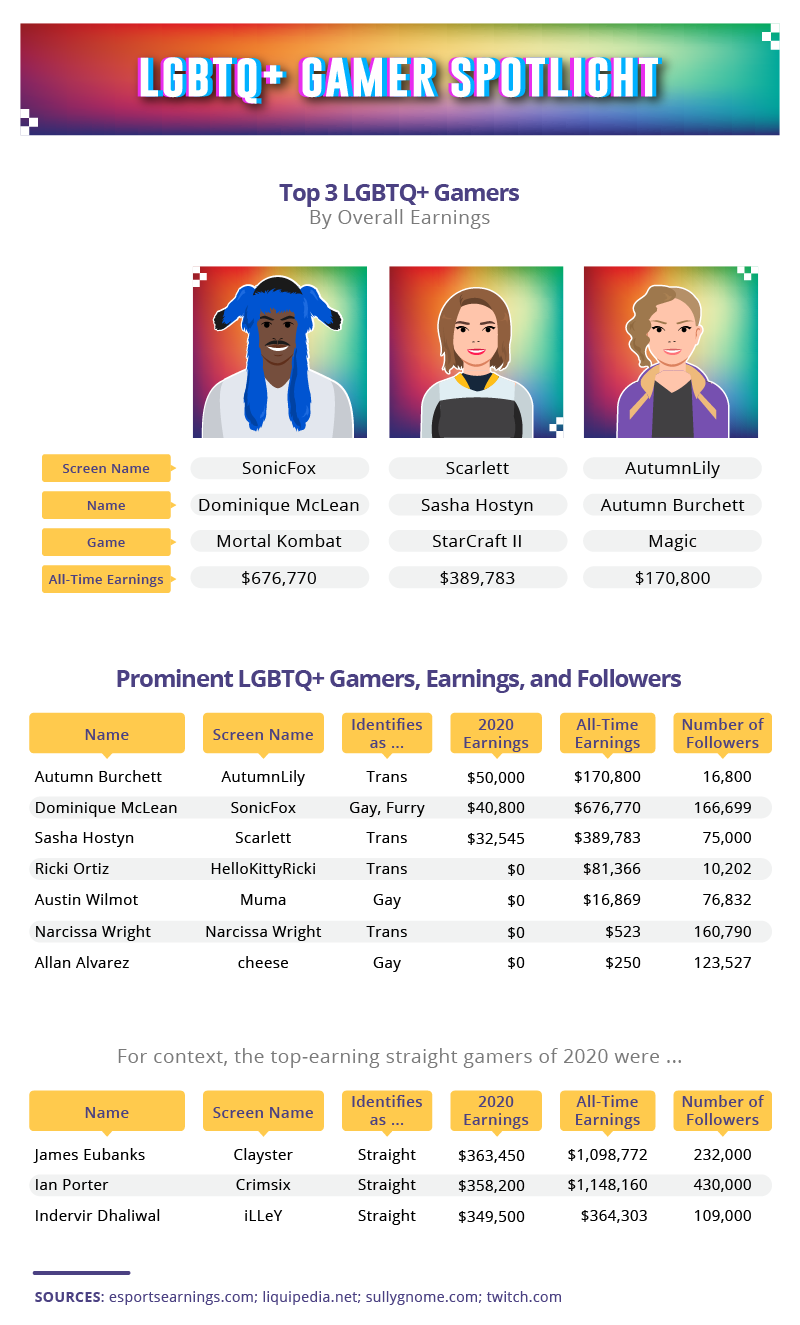 Among the top 500 earners of 2020, we discovered that our LGBTQ+ gamers earned far less than straight gamers. James Eubanks, also known as “Clayster” to his Call of Duty squad, earned $365,000 in 2020. In contrast, Autumn Burchett, one of the top earners among our LGTQ+ gamers, earned $50,000. In terms of popularity, Burchett has less of a following compared to Eubanks (who has roughly 14 times the following of Burchett), whereas Dominique McLean may be the most socially influential LGBTQ+ player, with 166K followers. 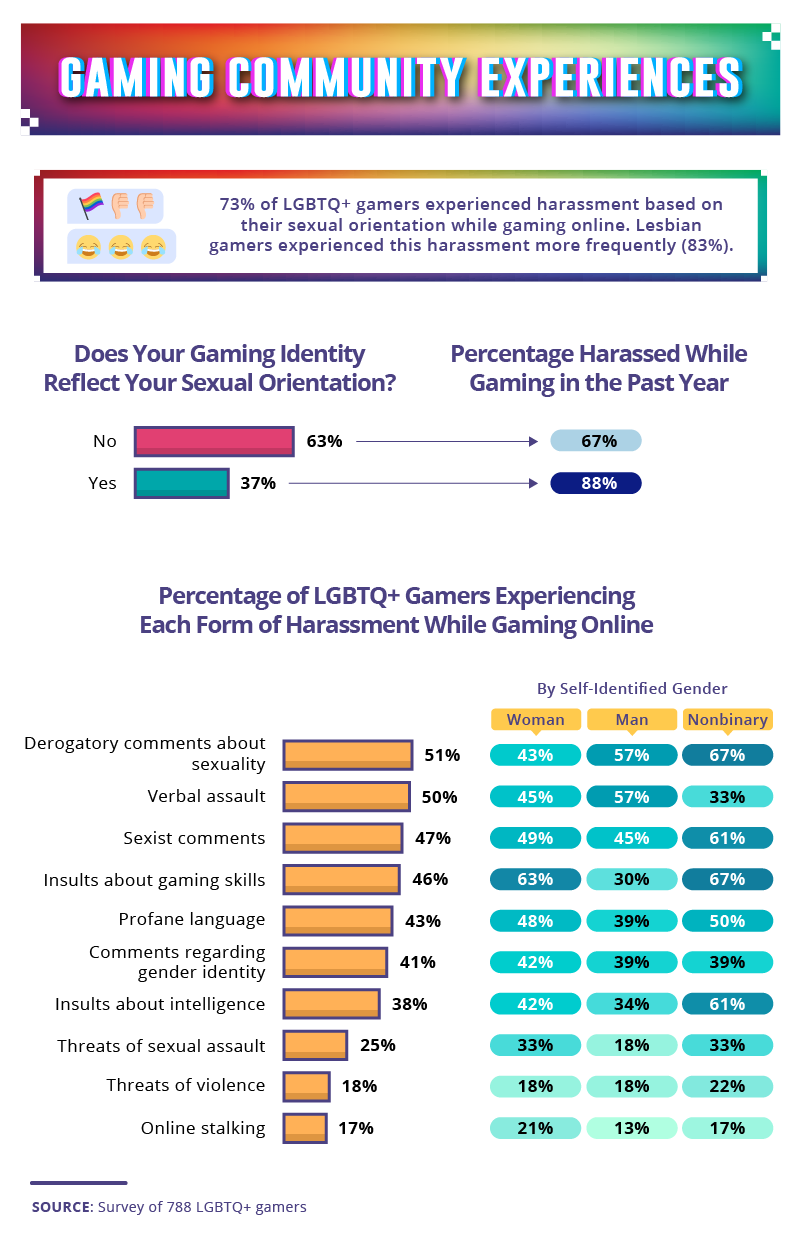 LGBTQ+ gamers were 21% more likely to be harassed online by the community than those who have not disclosed their sexual orientation. The subjects of these harassments are sometimes even violent. One in 4 respondents reported they had been threatened with sexual assault, with women and people identifying as nonbinary receiving this form of harassment at a rate 15% higher than men. LGBTQ+ women in our survey were also more than twice as likely to be harassed about their gaming skills than men.

The online gaming environment has led many LGBTQ+ gamers to take steps to avoid harassment online. Games like League of Legends have been reported as being particularly toxic environments for LGBTQ+ gamers, which could help explain why 41% of respondents avoided certain games and communities due to harassment. These experiences led 40% of LGBTQ+ to choose to forgo gaming online at all and 35% to lie about their sexual identity. 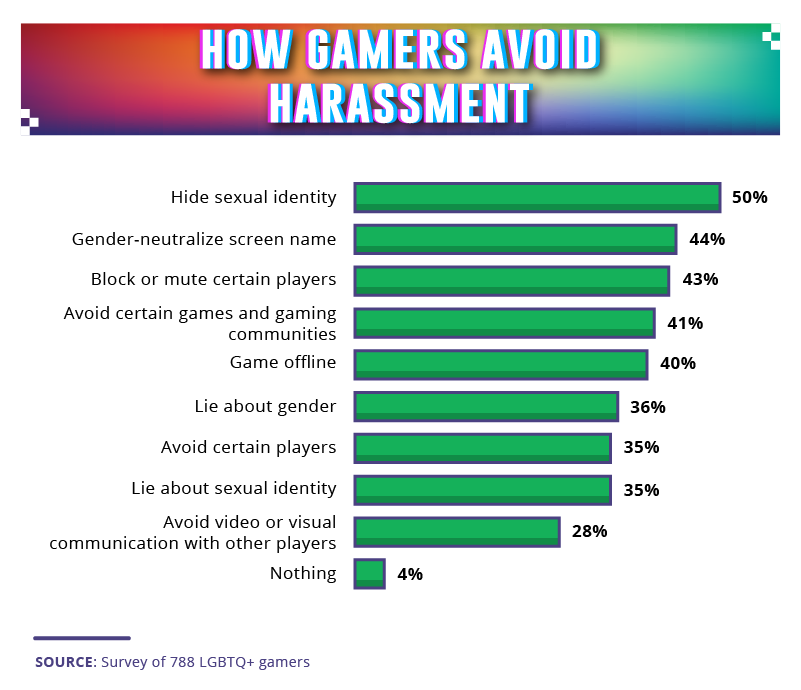 Coming Out Through Gaming

Our study found that online gaming can be formative for gamers discovering their sexual identity; 45% of the LGBTQ+ gamers we surveyed said they discovered their sexual identity through gaming. Gen Xers were the most likely generation to have video games influence the discovery of their identity (58%), compared to only 20% of Generation Z respondents and 41% of millennials.

The most supportive community for LGBTQ+ gamers, according to our respondents, was Animal Crossing, where 49% viewed it as supportive. The second-most supportive game was Call of Duty (27%); this was followed by Minecraft (26%). Animal Crossing has an active LGBTQ+ community of gamers, where some players coordinated a virtual pride week within the Animal Crossing: New Horizons universe. Animal Crossing allows gamers to choose their character’s style rather than choose their gender in order to be more open to different identities. If a game contains a queer storyline, 81% of LGBTQ+ gamers are more likely to buy it, according to our study. Games like Dragon Age have featured openly gay characters since 2015.

Our study shows that online gaming still has a significant problem with harassment, and half of LGBTQ+ gamers are still uncomfortable being open about their sexual identity with their gaming communities. But there is progress being made: Members of the LGBTQ+ community are garnering support online, as games like Animal Crossing provide LGBTQ+ gamers with a more inclusive environment and queer content starts to become more common. And while society as a whole may not be the supportive environment that sexually diverse gamers need, to many gamers, specific gaming communities are providing LGBTQ+ gamers support and friendship, as well as fun. With several games like Lore Finder and We Should Talk slated for release featuring LGBTQ+ characters, the gaming world, though still a work in progress, is seemingly moving toward inclusivity and diversity.

We surveyed 788 respondents in order to explore LGBTQ+ community experiences in the video game community. We defined gamers by asking them the frequency in which they played video games and excluding anyone who played once a month or less. Respondents ranged in age from 18 to 70. The mean age was 33.8 with a standard deviation of 10.9 years. 50% of our respondents identified as women, 47% identified as men, and 3% as nonbinary. We asked respondents to select their sexual orientation but allowed respondents to choose multiple. 58% of respondents were bisexual, 17% identified as lesbian, 16% as gay, 7% as queer, 6% as transgender, 5% as asexual, 2% as intersex, and 1% identified as another group including bicurious, pansexual, and demisexual.

Survey data has certain limitations related to self-reporting. These limitations include telescoping, exaggeration, and selective memory. We didn’t weight our data or statistically test our hypotheses. This was a purely exploratory project that examines the experience of gamers in the LGBTQ+ community.

Are you interested in sharing our study on LGBTQ+ gamers with your community? We have a couple of simple rules: Please only share this study for noncommercial purposes and link back to us in order to provide credit for our work!