Almost 1,000 gamers weigh in on the most desired video game crossovers. Would you play them?

Americans are playing more video games than ever before. This newfound playtime passion may also be fueled in part by the upcoming console wars between Xbox and PlayStation, both releasing their next-generation consoles just days apart in November.

With so much focus on video games, and possibly which games (or consoles) might be best, we decided to take some of the most iconic games and characters and fuse them together for a round of video game mashup. You know what Super Mario looks like, but what about Mario in a round of Need for Speed? Or Link in a new Final Fantasy game? To bring crossover dreams into reality, we surveyed nearly 1,000 gamers about the universes they most wanted to see collide and then commissioned artists to bring their requests to life.

Here are the final results... 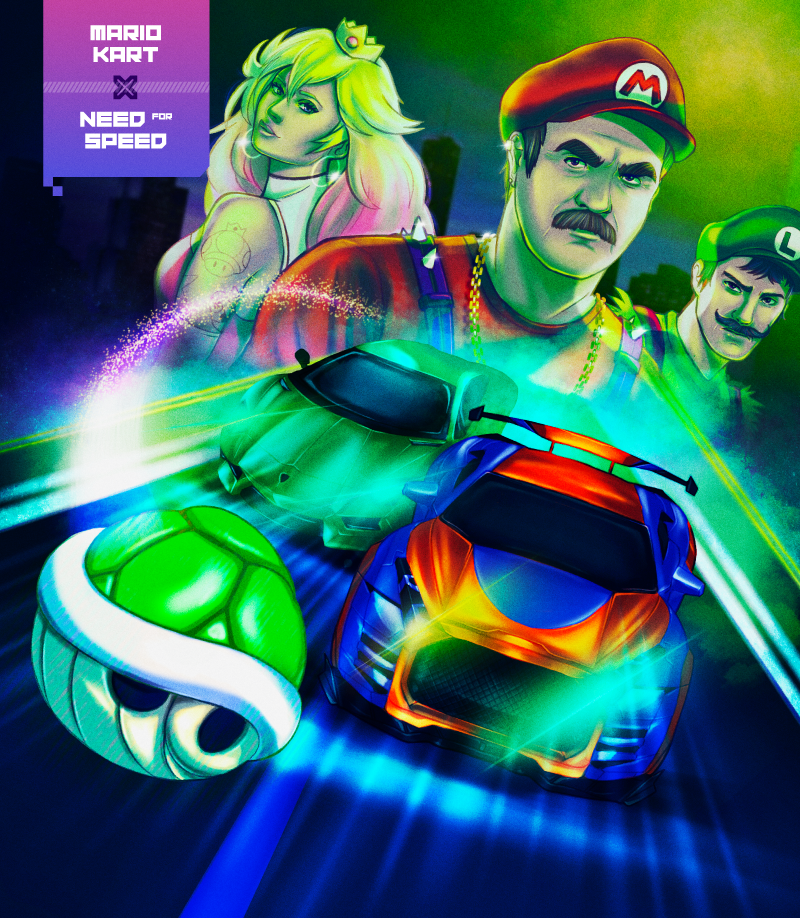 It's impossible to have a conversation about classic video game characters without discussing everyone's favorite turtle-crushing, princess-saving plumber. On the definitive list of most iconic characters, Mario has to be fairly close to the top, and even in 35 years, his overall design hasn't changed much. 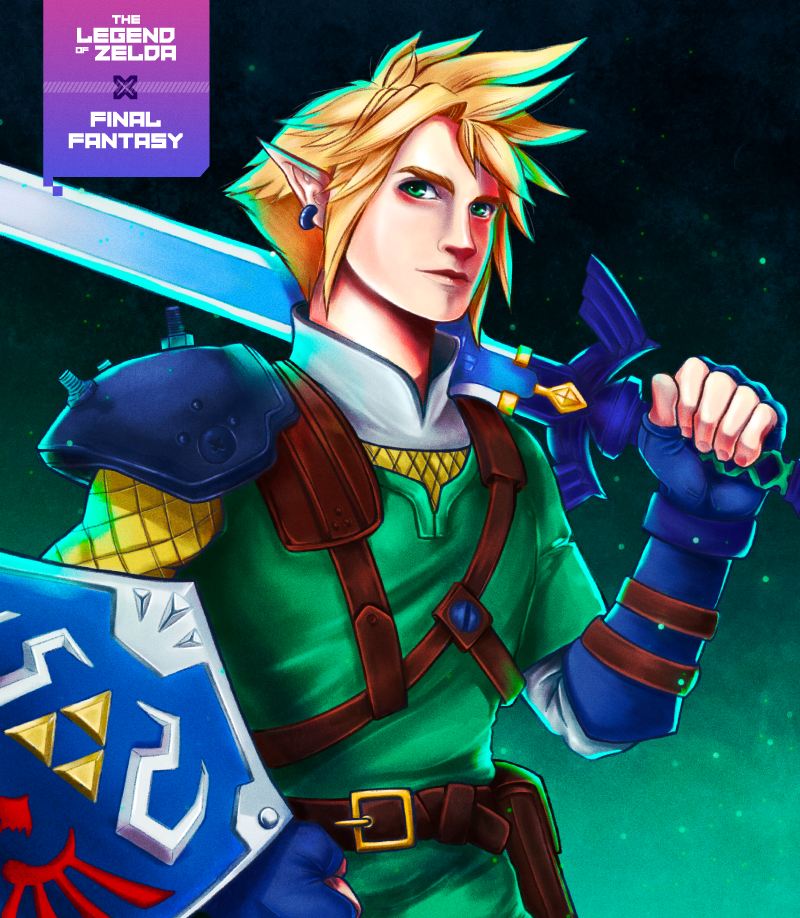 The first Legend of Zelda game in 1986 brought Link to life for the first time, but not unlike the graphics or gameplay of The Legend of Zelda, Link himself has gone through a number of redesigns over the last three decades. Similar to Zelda games, Final Fantasy is a franchise over 30 years old, and the most recent games might be relatively indistinguishable from the first. But no matter how much video game technology has evolved over the years – and the complexity of character designs and features with it – fans keep coming back for more. 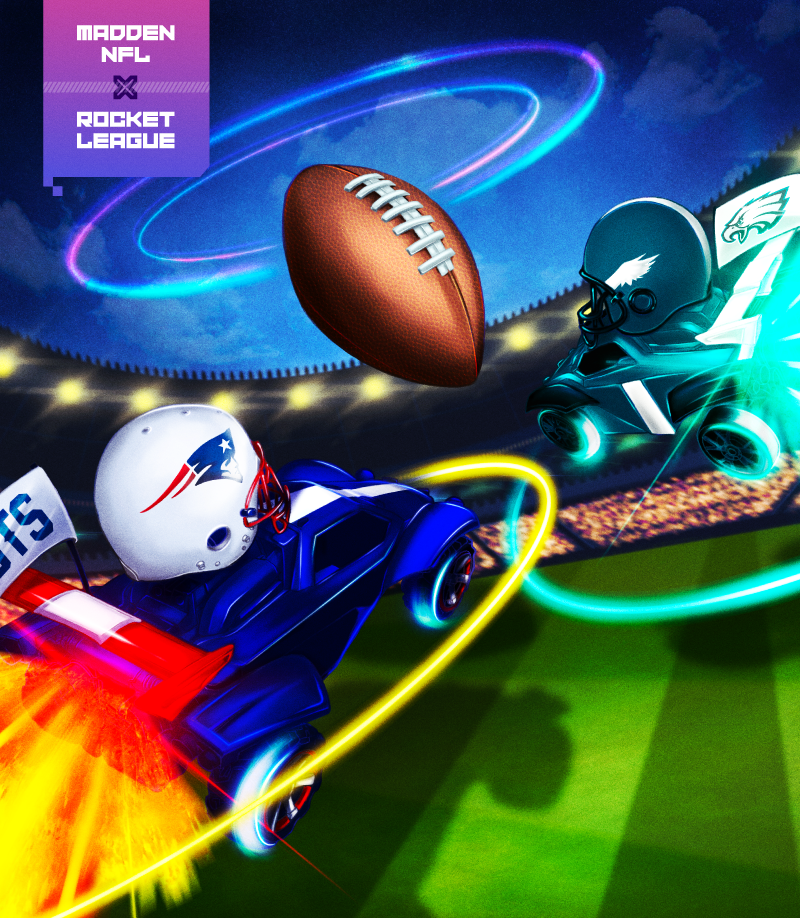 Madden NFL combined with Rocket League asks a simple question: What if instead of playing as professional football players, your favorite team consisted of race cars that usually play soccer? We're not entirely sure how players (drivers?) are supposed to pass or catch the ball, but the tackling seems relatively straightforward. 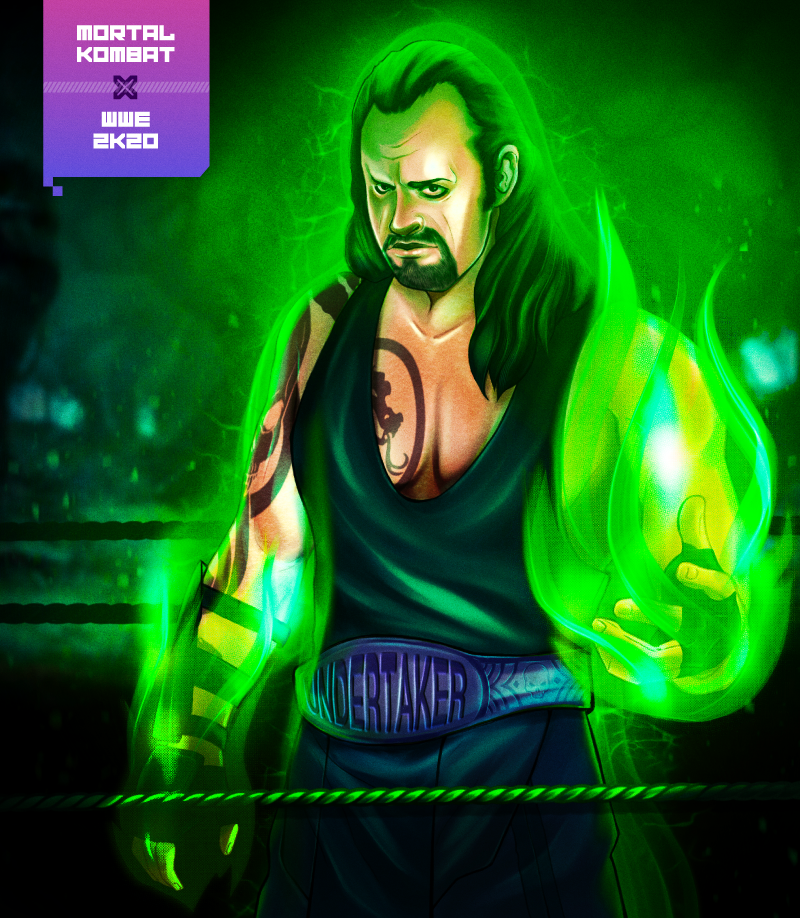 Fans have been screaming "FINISH HIM!!" to Scorpion and Sub-Zero in Mortal Kombat games for over 25 years, and the franchise itself has experienced a number of crossovers in its time. In games like Mortal Kombat vs. DC Universe and Injustice: Gods Among Us, the Mortal Kombat multiverse has expanded past its own realms. But those mashups are nothing compared to the dramatic intrigue of the fan-requested Mortal Kombat vs. WWE 2K20.

What Is the Most Wanted Video Game Mashup? 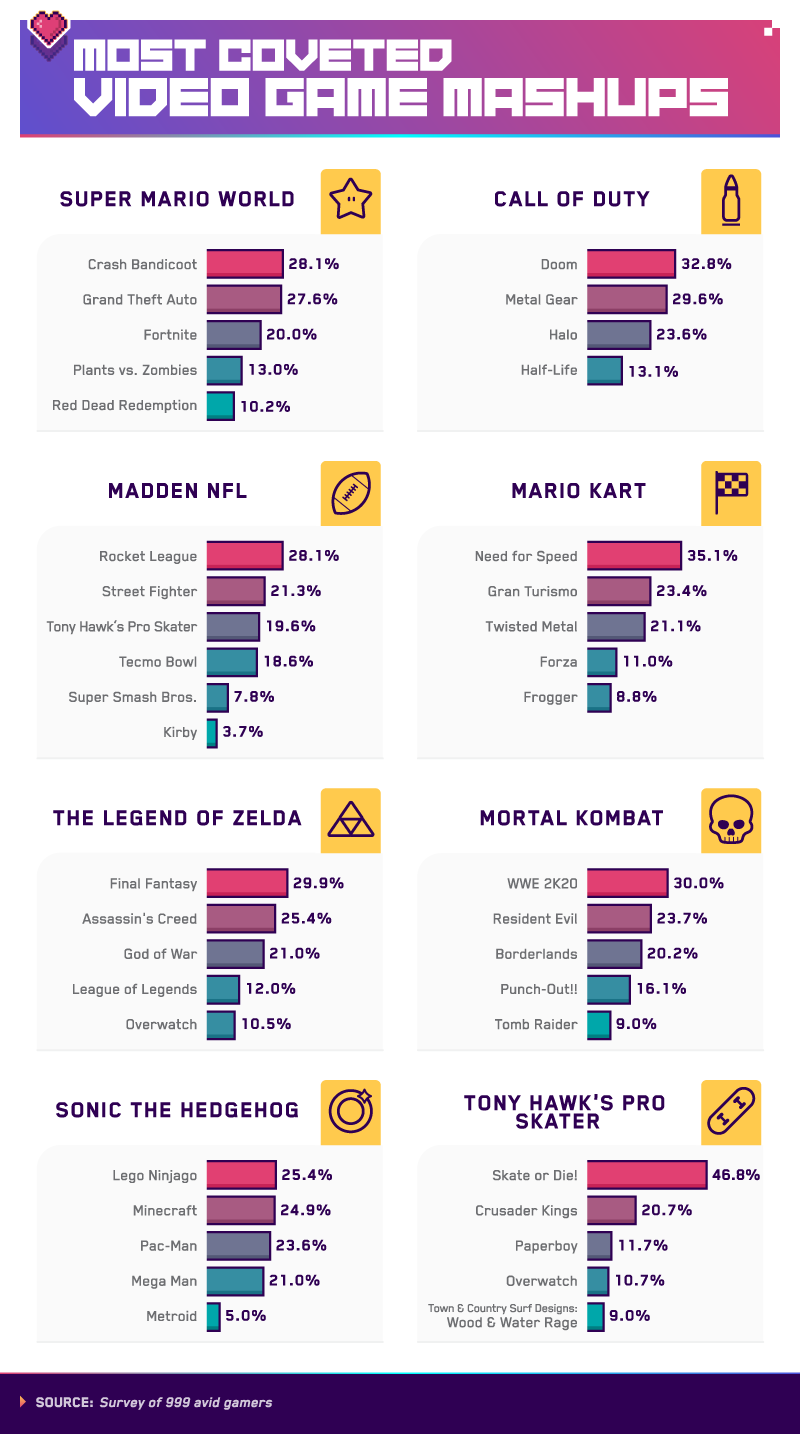 Some of the most popular and influential video game characters of all time are so iconic, they need no real introduction: Master Chief, Donkey Kong, Pac-Man, Mario. In some cases, the art style or composition of a classic character is so sacred, any major tweaks will be rejected entirely for the heartwarming nostalgia of their old-school designs (just look at the "Sonic the Hedgehog" movie for a recent example).

As such, we surveyed avid video game fans to find out which mashups they most wanted to see. In some cases, like where 35% of fans wanted to see Mario Kart mixed with Need for Speed, like stayed with like. In other examples, including the request from 25% of fans to blend Sonic the Hedgehog with Lego Ninjago, we found a completely unexpected combination. And while it's hard to imagine Madden NFL in the world of Rocket League (28%) or Mortal Kombat in the universe of WWE 2K20 (30%), we managed to find a way.

In these multiverse mashups, fans ranked the crossovers they most wanted to see, sometimes merging classic games with newer fantasy adventures or giving decades-old titles a more modern twist. Crossovers are a classic video game trope, and fans' requests for The Legend of Zelda X Final Fantasy or Mario Kart X Need for Speed show just how much potential exists when gaming universes collide. As we found, many fans are excited for games coming out for the new PlayStation and Xbox, including Marvel's Spider-Man: Miles Morales and Cyberpunk 2077, which means the potential for otherworldly mashups will only continue to grow.

We collected responses from 999 avid gamers via Amazon Mechanical Turk regarding their most coveted video game crossovers. Of the 999 avid gamers surveyed, 38.8% were female, 60.9% were male, less than 1% identified as nonbinary. Respondents ranged in age from 18 to 72 with an average of 36 and a standard deviation of 11 years. An attention-check question was used to quickly identify and disqualify respondents who failed to read questions in their entirety. The main limitation of this study is the reliance on self-reported answers which are faced with myriad issues, such as, but not limited to, attribution, exaggeration, telescoping, and recency bias. This content was created for entertainment purposes only. Characters are trademarked or registered of their respective holders. Use of them doesn't imply affiliation or endorsement.

Want to share our creative crossovers with your readers? You don't need to send us a game invite to use our findings or images for any noncommercial use, just include a link back to this page in your story as credit to our incredible team of analysts and artists for their work.