Chances are if you grew up after the television was invented, someone at some point has told you whatever you were watching or whatever game you were playing would "rot your brain," as these new forms of entertainment were considered by some to be mindless. Turns out this might not be the case, especially with gaming. We collected research on the effects of a variety of video games on the brain, and surveyed 1,000 gamers to explore how games may impact our brains, emotions, and behaviors. Read on to find out what we discovered.

Effects on Stress and Relaxation Levels

Understanding what positive and negative effects hobbies can have on us is crucial in making sure our lifestyle is doing more good than harm. The majority of our respondents experienced positive upticks in relaxation and lower numbers of stress while gaming. In fact, over half of respondents reported decreases in stress while playing video games. A recent study of U.S. veterans found that gaming can not only help with mood and stress, but coping and socialization as well. 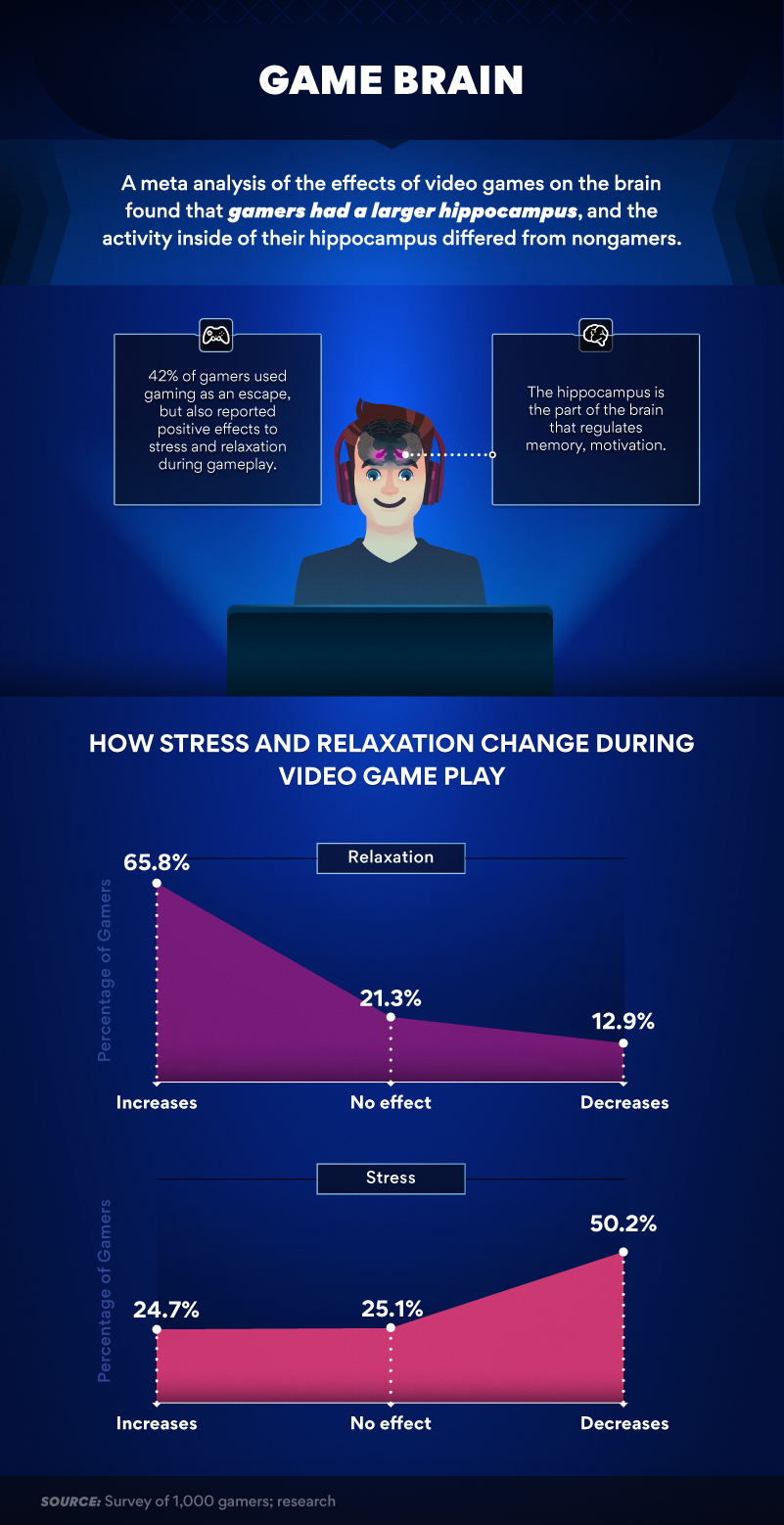 Stress reduction wasn't the universal experience, however, as 25% of respondents said gaming actually increased their stress. It goes to show that not all games are created equal, and because of the wide range of games offered, the sensations and brain activity engaged in each may vary significantly based on content, as we find later in our study.

Gains Without the Guns

Violent versus nonviolent video games have been a longstanding topic in the gaming community, with a long history of vocal critics for violent games, even within the industry. But in a population with more anxiety than ever, playing games that trigger alpha brain waves could be an answer. Alpha brain waves are dominant when we are relaxed and calm. In fact, 75% of our respondents answered that nonviolent games helped them relax, and just under half of respondents said they helped decrease anxiety. Another benefit to opting for a nonviolent game could also be in our hearts – we mean the muscle. A study found that gamers who played violent games had heart rates 6.5% greater during game play than those that played nonviolent games.

While 81% of survey respondents felt competitiveness was a benefit of sporting games, 61% answered that this sort of gaming relaxes them as well. All the while, the brain could be getting quite the workout during gameplay, with some research even suggesting that gaming enhances visuomotor skills, which is strongly related to hand-eye coordination. 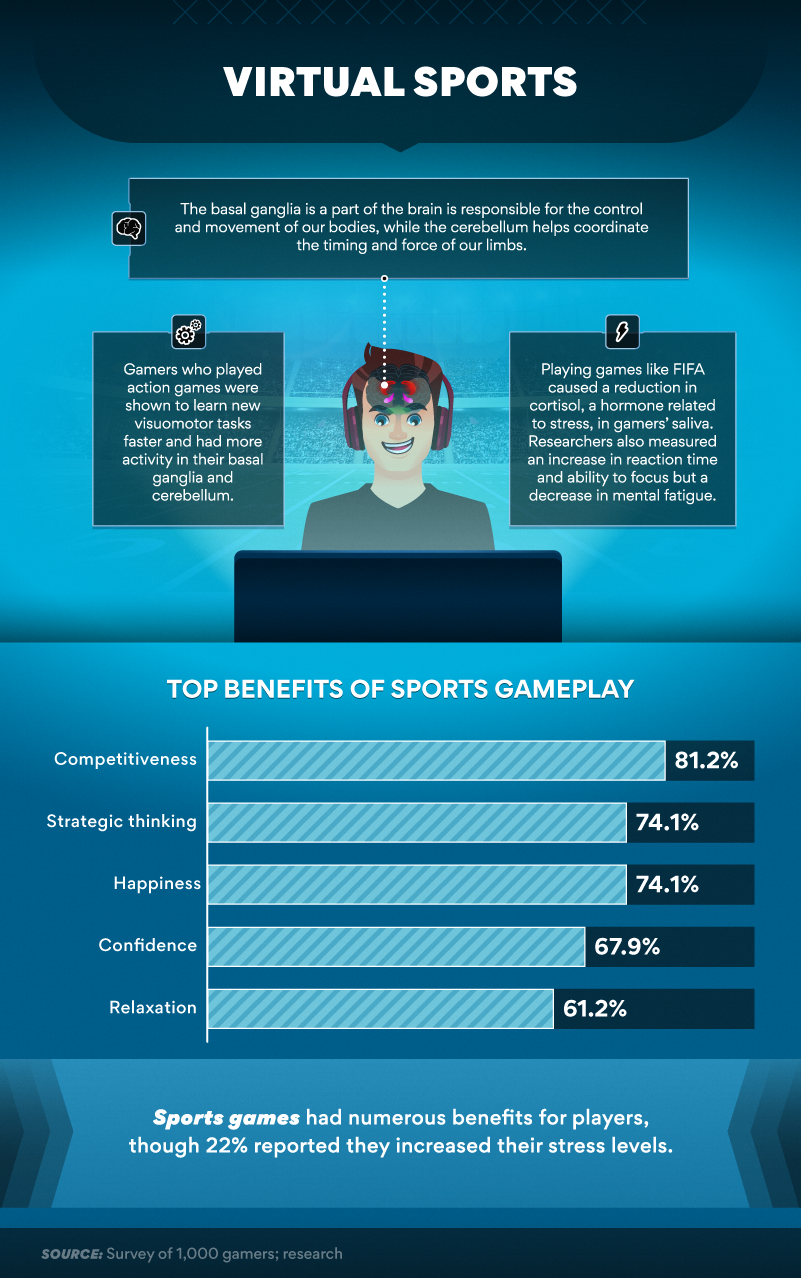 If you're a sports fan interested in game strategy, playing sports games might have even more benefits. Nearly 75% of respondents reported benefiting from improved strategic thinking. Additionally, a survey of players of the popular soccer game FIFA were found to have increased levels of attention after playing the game.

Fight or Flight, Then Relax

Being scared wasn't necessarily as negative of an experience for some as it was for others. In fact, some gamers actively sought it out. The success of games like Call of Duty has been massive in recent years, with COD accounting for more than 25% of revenue growth for Activision in 2021. 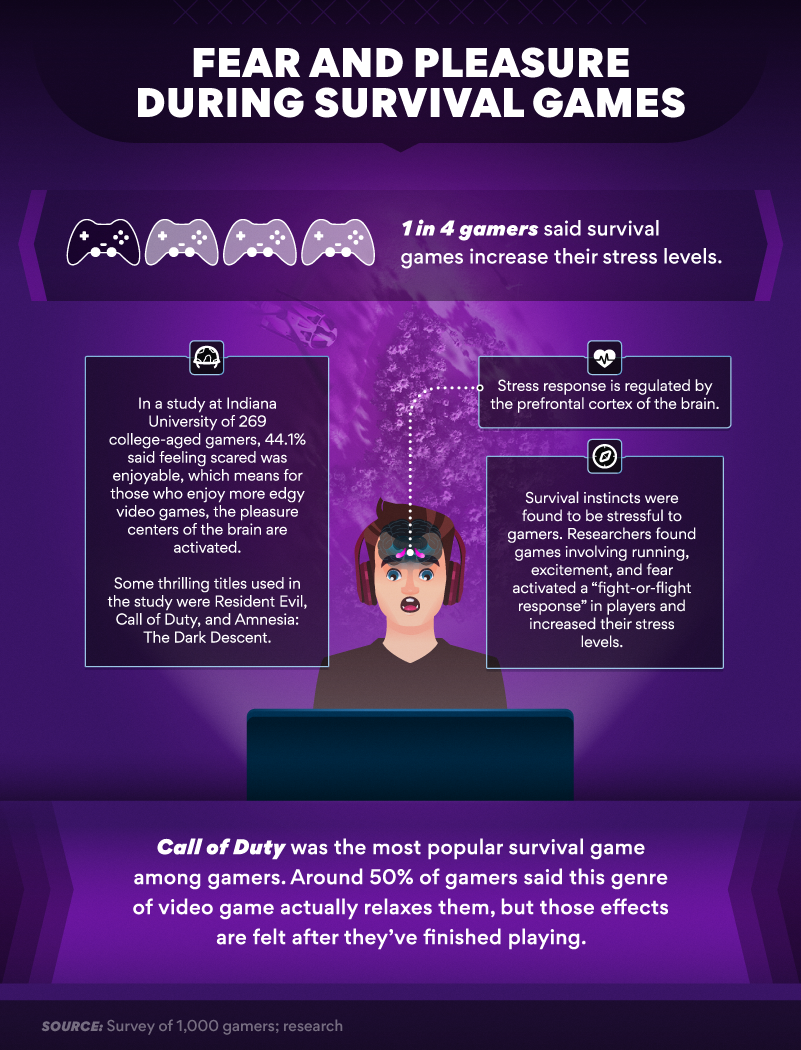 While games like Call of Duty have been found to activate fight-or-flight responses among gamers – which are known to increase stress levels – around 50% of gamers reported that survival games relax them but that they don't feel the benefits until after they are done playing the game. However, according to the National Institutes of Health, too much exposure to this fight-or-flight response can actually make it harder for us to deal with stress and can impair brain functions associated with concentration, attention, memory, and learning.

The possible negative effects of violent video games have been a heavily debated topic, one that made it all the way to the Supreme Court in 2011 overturning a California ban on the sale of violent games to minors. However, gamers who play these games don't always view them in a negative light. There is even some increasing evidence that shows that the guilt following immoral video game play can even provoke prosocial behaviors in real life. 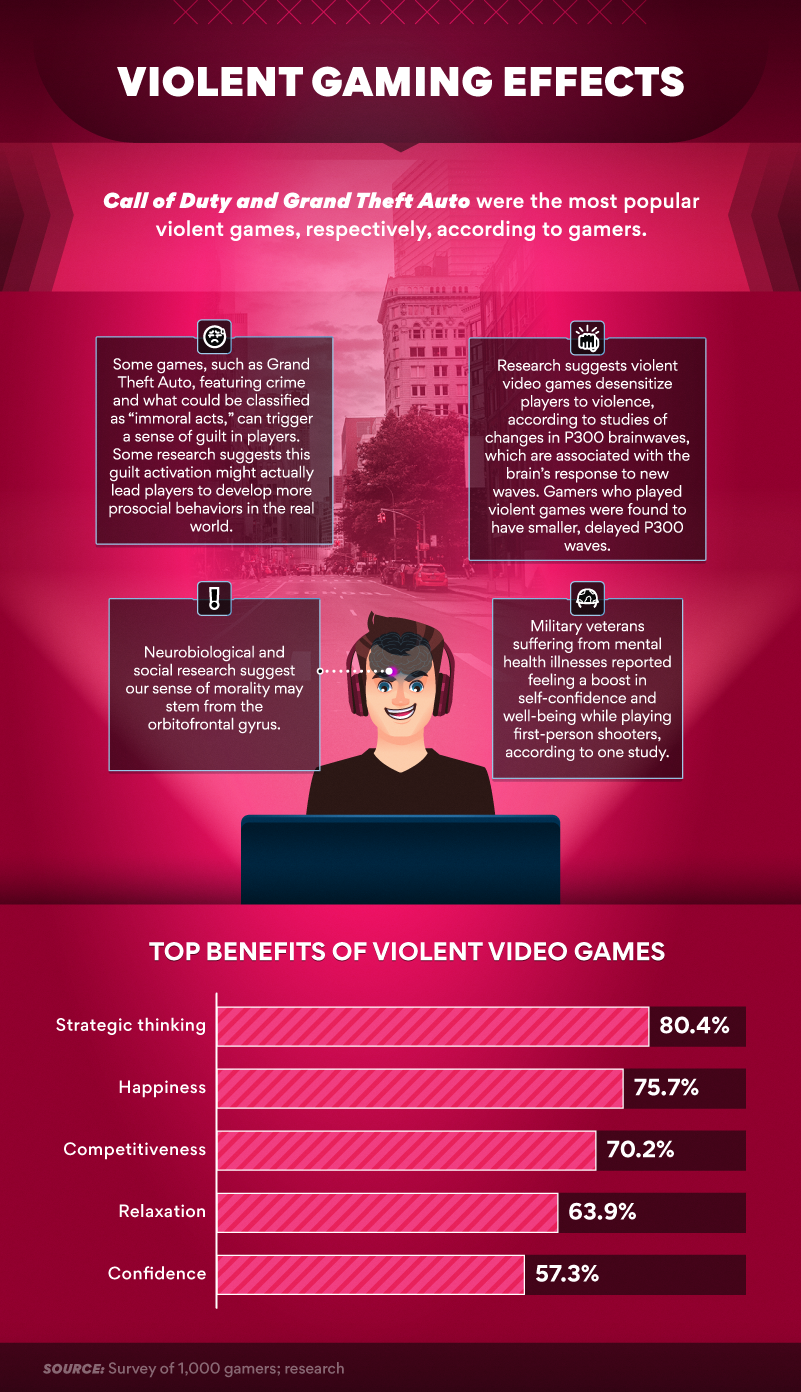 Over 80% of respondents found these games helped their critical thinking, and over 75% answered that playing these games has a positive effect on their happiness. There are even some social benefits, according to a study of over 500 Counter-Strike gamers, due to the opportunities a game offers for socialization and being rewarded for one's skill.

How You Play Matters

Video games get a lot of negative attention due to research surrounding violent media and desensitization, studies on gaming addiction, and the connection between gaming and obesity. And though these are very real risks, studies also show that video games can be very beneficial to the brain and even sharpen your spatial skills, creativity, and decrease anxiety. So what are some ways you can game smarter?

We surveyed 1,000 gamers to explore how different games affect their stress, relaxation as well as other emotions and physical reactions. Around 42% of respondents identified as female, and 58% as male. Less than 1% of respondents identified as non-binary. Gamers ranged in age from 18 to 72, with an average age of 35. Due to limitations surrounding self-reporting, survey data has certain limitations such as telescoping, exaggeration and selective memory. Data were not weighted, and an exploratory examination of gamer experiences. We also conducted research across numerous research articles and journal papers ranging from the NIH to Frontiers, an open access publisher and science platform, PLOS Journal, Sage Journals, and Harvard Health Publishing, among others, in order to explore brain stimulation during video game play across various genres.

If you are a journalist interested in using research from this project, or would like to cover our study, please feel free to use the content included above for noncommercial purposes only. Please properly attribute the study and provide a link to our page so viewers can learn more about the effects of video games on the brain.